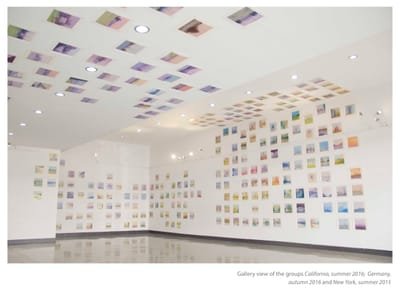 One July morning I received the first landscape that Marlon gave me. The Californian sunset came to me in prose and full of ambiguities - proper of those who can't capture the wonder but try.
I was fascinated by the fact that this young man, born in a region of outstanding nature, was struck by the quasi-mystic delicacy of the North American west coast. But it works like this: when perception is shaken by high contrasts, the spirit is moved.
During that summer I had the opportunity to corroborate it. Anxious I received daily in my mailbox extensive descriptions of Los Angeles, San Francisco, Corona del Mar; I moved from the coastal areas to the suburbs, and then I entered the chromatic and sonorous variations of the Latin neighborhoods. Marlon gave me that foreign nature that had passed through the sieve of its shocks; what was reconstructed was not processed by objective thought, rather it resulted from the sensory frenzy, from the excitement of the senses. It was premature, immediate, unconnected, chaotic...; it reflected the impression that the new explored medium produced in his sensibility.
Man and nature came to me merged. He imposed feeling on reason: he presented the imprecise environment in order to reveal himself in his spiritual dimension.
…
Sharing his experience as an explorer also allowed me to see a particular image of Marlon. Such honesty made it difficult for me to reciprocate. It was then up to me to reveal to him the parallels I found between his experiences and my references. We exchanged thoughts about the journey, about how it had manifested itself in art, about the transcendental figure of the traveller for the completion of the notion of the world...
I remember specially the connection I established between Marlon and the romantic travellers of the 19th century. For me, his approach to the landscape was loaded with that impulse that prioritized global impression over scientific detail. He, like them, merged with the medium to generate a personal vision of what was lived.
That connection became even more evident when, once in Cuba, he gave me his impression of the landscape with the help of tools that were, through training and academia, much more familiar to him. With New York, Italy, California and Germany, he captivated me thanks to the same romantic spirit of his prose, but from the intimacy of study, essay and chromatic experimentation in small format painting.
…
The paintings, as well as their verbal constructions manage to make manifest the particular relationship between subject/environment, subject/nature other people; but unlike those, they start from the intellectual processing, from the calm that comes with reflection. However, such calm does not necessarily imply definition, concretion: their pictorial productions resemble memory; like memory, they give away diffuse fragments that review sensations provoked by the landscape: they seek to reconstruct the lived experience, but not to represent the space where the experience is lived.
That is why the pictorial result renounces the common places of the cities motifs -all well-known regions, highly visited-, almost rejects them; it discards the landmark, and bets for the indeterminate, for the non distinctive space, the uninhabited one. Marlon dissipates the connection with the referent and approaches the abstract to evoke the metaphysical of habitable space. He reconstructs atmospheres associated with the city and the climate in accordance with the season of the year in which he was present; and those atmospheres, at the same time as they allow the link of the pieces with the motif cities, generate a new visual-aesthetic and poetic experience for the observer.
In spite of the dissipation of the referents, it is possible to find in his paintings figures that recur. Particularly appropriate are those that inevitably speak of travel: bridges, tunnels, docks, trains (both the representations seen from the train and the means of transport itself), stations, airports, cemeteries, are evocative of a perennial existential spring. From their condition of places of transit - in direct association with the pictorial lightness with which they are constructed - they function as metonymies of the journey in constant becoming, change, inapprehensible metamorphosis. His paintings speak of travel, through landscape, as a material displacement directly associated with individual freedom.
…
Grand Tour is a monumental exhibition. More than 600 pieces take possession of the gallery, its walls and ceilings. It overwhelms the immensity of the whole and the impossibility of apprehending it; it oppresses the painting and one feels invited to be present in a space full of testimony and experience. All that remains is to try to revive it (the artist experience) and let the attraction provoked by certain stimuli bring us closer to punctual units, to fragments of an experienced environment, and the rest to feel it as a new atmosphere, as a self-referential macro-landscape, as evidence that the way to capture the marvel is random but passable.