Marlon Portales: from language to perception. 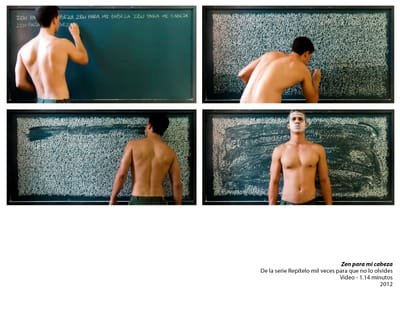 Performance is one of the creative aspects ascribed to contemporary art that has not ceased to have a presence in Cuban art over the last two decades. However, in the work of the artist Marlon Portales, the performatic act is presented to us as an action filmed by the video camera, thus becoming a video performance, whose main characteristic will be to transform the artistic work into an analytical exercise, loaded with anthropological and social contents.
Mimetic gestures, the multiplication of his figure, and the imprint, become the foundation of bodily actions through which his poetry makes language a diffuse zone, since his works do not rest precisely on linguistic conventions typical of art analytics, but on the appropriation of language facts that make sense in those actions. These are constructive resources of aesthetic value through which he organizes the structure of his works.
In this way his analytics are tricky, because it is not a question of reflecting on the capacity of language to think about its own structures, but on the possibilities of leading it towards situations based on repetitions and reiterations that make impossible any understanding of what is expressed by the texts, in such a way that the communication evaporates before the redundancy of the gesture that contains it.
Her performances are based on different critical postures that do not accommodate, nor are they exhausted, after the poetic gestures that derive from her dances with language.
Let's start by approaching the work Zen for my head (2012) from the series Repeat it once so you don't forget it, Homage to Nam June Paik, this gravitates in the automatic action of writing this phrase on itself on a blackboard, until it covers all the available space, making its reading inaccessible, it finishes it by rubbing his head on it, until the text disappears swallowed by his face, which has been marked by the chalk, with which it was written. The conceptual symbiosis is embodied when the sentence is passed on to the artist's body.
To the same series and year belongs the piece I must not betray myself as an artist. Homage to Ives Klein, in which he once again assumes the constructive principles mentioned above, as if chanting that phrase settled a debt of gratitude with that master of modern analytics. In any class, the artist complies with the punishment, resting his hands, shoulders and torso on the blackboard, closing the action with this bodily signature.
The work Yo solo soy un ejército (2012) of the series, Avant Garde no longer exhibits words, although the automatic gesture does. This consists of delineating his own figure again and again, until forming a human conglomerate, of a hedonism that symbolizes the immense power of the one who is capable of multiplying on himself, while in Regurgitador (2013) of the series Pensamiento Democrático, he transfers that principle of repetition to digitalized action. From his mouth sprouts the word discourse that traces a diagonal to be later swallowed by the artist himself. This gestural succession ends with the emanation of a powerful jet of letters that open in the shape of a fan, in a burst that gradually disappears. A beautiful cascade of letters, accumulated one on top of the other, turning the eventuality of the discourse into a failed gesture.
In the work Expanded Consciousness, from the series Incontinent Body (2013), the support is replaced by a white plane on which the artist with his back delineates his figure, repeating it in such a way that when it is extended it covers all the available space. The body increases in size and becomes more powerful. There is no face, no gesture, and yet such a regeneration of the image gives the impression of an energy that advances without stopping.
They are actions that reach beauty, mutilating under its litany the communication with the spectator. Marlon sentence: How is our mimetic envelope condensed in a context in which ideological currents mark the guidelines of our behavior? (1) Art passes through the body and language, and the result is condensed in performatic gestures whose senses are revealed in the title of the pieces, although those gestures end up closing the way to the spectator.

1-Note extracted from the artist's dossier.